By the end of the first three quarters of 2016, the German nursing care property investment market had already doubled the record result of 2006, delivering a transaction volume of €2.4 billion. On the back of a strong final quarter, the full-year result now posts a new record of €3 billion in total, driven mainly by large-scale portfolio acquisitions. At €2.6 billion, the portfolio share in the overall transaction volume amounts to around 87%. Compared with the 2015 transaction volume, the new record represents a year-on-year increase of some 255%. This is the conclusion drawn in a fresh analysis prepared by commercial real estate services company CBRE.

“Although the annual results can be considered an exception due to the numerous large-scale portfolio transactions, interest in this asset class has nonetheless steadily increased,” says Jan Linsin, Head of Research at CBRE Germany.

In the investment year now elapsed, the German nursing care property market was largely determined by large-scale portfolio transactions. Above all the largest transaction of the year, which consisted of France’s Primonial REIM acquiring a nursing home portfolio comprising 68 nursing homes from Even Capital, contributed a considerable share of almost €1 billion to the overall transaction volume. The two second largest portfolio deals, with CBRE advising the buyer in each case, also account for a significant portion in this year’s result. This concerned, on the one hand, Deutsche Wohnen’s takeover of the Pegasus portfolio of 28 nursing homes in a volume of €420.5 million from Berlinovo Immobilien Gesellschaft mbH and, on the other, AXA Investment Managers’ takeover of the 16 nursing homes in the Lisa portfolio from Blackstone.

Measured by the overall commercial property transaction volume, the nursing care and retirement homes asset class accounted for a share of around 6% based on the exceptional annual result. For comparison’s sake: in past years, this asset class achieved a share of a mere 2%. “Along with the current yield advantage over established classes, the greater interest in nursing care properties is attributable to care place demand, which is independent of economic conditions, as well as the need for care places, which is set to rise significantly in the coming years,” says Dirk Richolt, Head of Real Estate Finance at CBRE Germany.

Proportion of foreign investors at 61%

The highly fragmented market structure compared with other countries such as France, Great Britain and the United States makes German nursing care property particularly attractive to investors from countries with well developed markets. Germany has numerous operators with a very low number of nursing homes which qualify as takeover candidates in the ongoing process of consolidation, and therefore offer opportunities for further growth. It therefore comes as no surprise that the lion’s share of capital invested worth €1.8 billion, equivalent to 61%, comes from abroad. The largest share of 46% in the overall investment volume was attributable to French investors, due in the main to the acquisition of the large nursing home portfolios by Primonial REIM. In second place come investors from Belgium with a share of 9%. Open real estate and special funds, which accounted for some 46% in the entire transaction volume, were the strongest buyer group in 2016 by far. These were followed by property companies and REITs at a good 21%, as well as asset and fund managers at around 12%.

Despite another yield decline of 25 basis points, first rate nursing homes at 5.50% still hold a high yield advantage over traditional asset classes. The prime yield for cutting-edge nursing care homes in the investment centres comes in at around 190 basis points above that of office properties in comparable locations and 210 basis points above the prime yield for retail property. The comparison with operator hotel properties also shows a positive spread of 100 basis points. “The strong demand for traditional commercial property, which coincides with a limited supply of suitable properties, ensures that niche products which deliver higher risk-adjusted yields, such nursing care properties, have increasingly caught the attention of investors,” Richolt comments. “Moreover, further market consolidation is having a positive impact on the assessment of the nursing care market and eliciting a growing interest in operator properties,” Richolt adds.

Also in the coming years, the German nursing care market will continue to develop as a growth market on the back of current demographic change. “An increase of one million people requiring nursing care anticipated in the period through to 2030 alone would significantly outstrip the existing supply of care places. In view of the additional amendments to the law to be implemented, which entail the updating of a large number of nursing homes when existing care places will no longer be available, the need for a great deal of investment in nursing properties is set to continue,” Linsin explains. “The huge need for investment funds, for new builds as well as for existing properties requiring updating, will continue to meet with investor interest at a high and sustained level in the years ahead, which is likely to generate high capital inflow from abroad. For investors whose own countries no longer permit significant growth in the nursing care market, the German commercial property market, which counts as safe anyway, offers the best preconditions for benefiting from the developments,” Richolt adds.

2016 proved to be a special year with an exceptional investment volume which cannot be taken as a yardstick for developments in the coming years. At present, there is no great pressure to sell in the market, which might suggest a result similar to that of 2016. “Nevertheless, the process of a maturing market and the current yield advantage of nursing care properties are increasingly attracting the attention of domestic and foreign investors on the lookout for alternative investment opportunities. A dynamic trend can therefore be expected in the nursing care property market in 2017 as well. All in all, a transaction volume of around €1 billion is within the realm of the possible,” Linsin states. 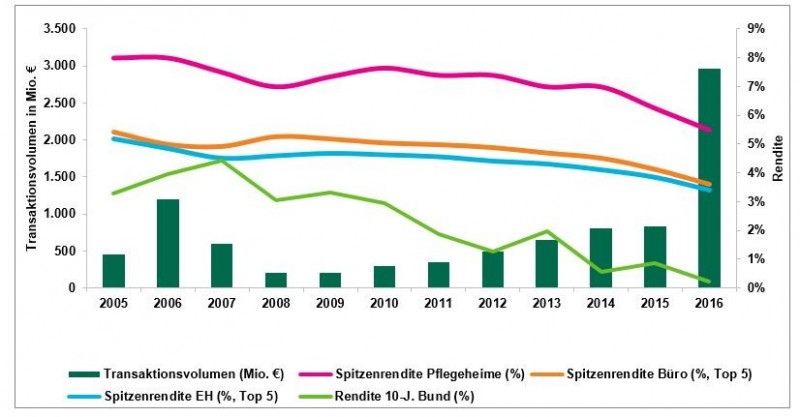