The German investment market for residential portfolios ranked among the most popular investment targets in the German property market in 2016 as well. Overall, revenues of some €13.7 billion through trading in residential portfolios and complexes upward of 50 residential units were recorded. The average of the past five years (including the record prior-year figure of almost €23.3 billion, which included the GAGFAH takeover by Deutsche Annington AG) was therefore slightly exceeded. This is the conclusion of a current analysis prepared by the commercial real estate services company CBRE.

“This year’s take-up was markedly determined by the fourth quarter which counts as one of the highest in recent years,” says Jan Linsin, Head of Research at CBRE Germany. With an investment volume of around €6.3 billion in the months from October to December, almost half the entire transaction volume in 2016 was realised in the last quarter. The exceptional quarterly result was attributable in particular to two transactions worth billions from the Conwert takeover by Vonovia and Morgan-Stanley’s acquisition of the BGP portfolio. “The very strong final quarter impressively illustrates the unabated interest of domestic and increasingly international investors in the German residential property market and underscores Germany’s role as a safe investment haven,” Linsin comments.

Property developments popular with institutional investors as a safe investment

Around three quarters of the take-up volume (€10.2 billion) was attributable to existing portfolios. Due to the large-scale transactions, mainly listed property companies and institutional investors were among the buyers. The average purchase price achieved with existing portfolios amounted to €1,245 per sq m of living space.

“As the German housing market continues to be dominated by strong demand coupled with short supply, new construction, which is picking up momentum with more than 300,000 residential units recently approved, offers an attractive investment target,” explains Konstantin Lüttger, Head of Residential Investment at CBRE Germany. At the same time, the volume invested in property development increased for the fourth year in a row and accounted for 25% of the transaction volume, equivalent to €3.5 billion. “This is the highest relative share in the overall transaction volume so far recorded for new build development”, Linsin says. “Institutional investors in particular, such as special real estate funds, insurance companies and pension funds, are concentrating on core properties in established centres and have secured a number of property developments in the top locations partly in the context of forward funding,” Lüttger explains. With an investment volume of around €2 billion, representing a market share of some 56%, they belong to the most active buyer groups of new building developments. Overall, the focus of investments was placed on residential property development and newly built multi-storey residential buildings, mainly in the top locations and university cities, as well as other in cities reporting dynamic, socio-economic development. In Berlin alone, more than one billion euros were invested in property development. “The average take-up per deal amounts to €39 million in the mid-size segment at an average purchase price of €3,520 per sq m of living space, with significantly higher purchase prices commanded depending on the location and facilities,” comments Michael Schlatterer, Team Leader Residential Valuation at CBRE Berlin.

“Despite the upturn in residential building permits and the associated increase in completion numbers in multi-storey residential construction, supply is far from being sufficient to cover demand boosted by the sharp population growth in urban areas,” Schlatterer says. The supply shortfall and the search for an alternative in new housing developments was reflected overall in prices rising again compared with the previous year. With a total of 272 registered portfolio deals (263 the year before), a total of around 148,000 residential units (down 56%) changed hands. “The average purchase price per sq m of living space has risen to €1,490, which is some 35% more expensive than in the previous year,” Schlatterer explains. The purchase price per residential unit has also risen by 35%, averaging €92,810 per unit.

Growing interest in student halls of residence and micro apartments

Along with the rising interest in property developments, other usage forms, such as student halls of residence and micro apartments, are increasingly attracting investor attention. “A growing number of international investors in whose domestic markets student halls of residence and micro apartments have long been established as a separate asset class proved to be active in Germany’s market,” Linsin says. “The greater interest in investing in the German housing market as a relatively secure investment, coupled with the good growth prospects, generated a transaction volume of more than €900 million through trading around 8,100 apartments in student halls of residence,” Linsin comments.

“We anticipate that the process of market maturity will be ongoing in the segment of student halls of residence in the years ahead, so take-up is also set to increase. This trend will be driven on the one hand by the volume of tradable existing stock, and on the other by further investors and operators specialised in this asset class entering the market,” Lüttger adds.

Along with continuous portfolio streamlining by the large portfolio managers and concentration on their core markets, scarce supply in the urban areas will be the dominating topic on the German housing market in 2017. Consequently, the search for alternatives in centres not in the top locations as well as property developments will be the drivers of the investment volume in residential property portfolios. It can be assumed that the competition for preferred property will become tougher and prices will rise further. “Given Germany’s stable economic situation and the growing political uncertainty in other European countries, the coming year is likely to see international investors flocking increasingly to the German housing market,” Linsin states. “In 2017 we anticipate a transaction volume in similar dimensions in the double-digit billion range which will approximate the five-year average,” Lüttger predicts. 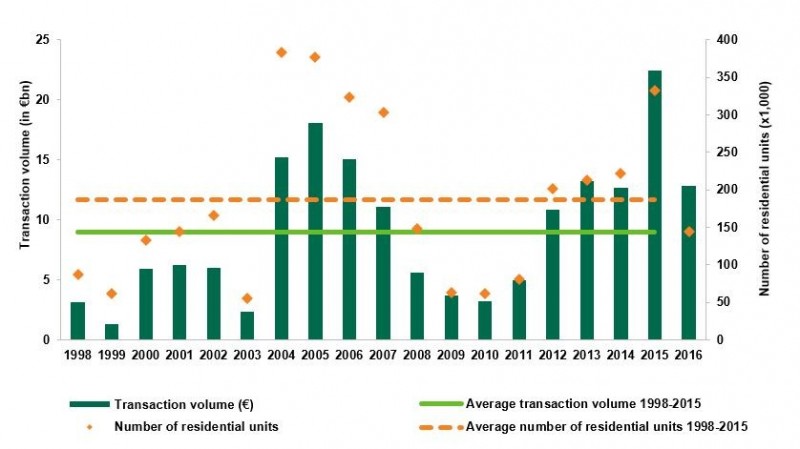