Huge domestic and international demand for German retail property continued to run at the same dynamic pace in the year 2016 as well. According to analyses conducted by commercial real estate services company CBRE, a total of €12.8 billion was invested in this type of use throughout Germany in 2016, delivering one of the best results since records began. The final quarter proved to be the strongest with more than €4.6 billion. “Even though the result is some 30% below the record achieved in 2015 with its various corporate transactions in the billion range, the 10-year average of €10.2 billion was significantly exceeded in the year now ended,” commented Jan Linsin, Head of Research at CBRE Germany. “Following a hesitant start to 2016, investment momentum picked up considerable pace, as predicted, and led to this very good full-year result.”

At around 19%, around one fifth of the investments in this asset class was attributable to the Top 7 locations, representing another marginal decline in the share of investment centres in 2016 compared with the previous year (23%). Due to the considerable constraints on product availability in the top cities, as well as the more attractive yield level, investors are increasingly turning to other locations. The investment year in the seven large cities nevertheless showed a disparate picture: While Hamburg (up 264%) and Munich (up 106%) each reported a significant increase in the volume invested in retail properties, this figure declined in the other top cities, partly quite substantially.

All in all, approximately €5.2 billion flowed into retail parks, retail warehouses and food markets, corresponding to a share of 41%, which indicates significant growth in the share of this asset class compared with 2015 (34%). The shopping centre segment, with a transaction volume totalling €3.9 billion (31%) took second place, with acquisitions in an overall volume of €3.6 billion made in particular in properties outside the Top 7 centres. An amount of €2.3 billion in total was invested in inner-city commercial buildings, equivalent to a share of 18%. A major portion of this was attributable to German investment centres in which retail properties in prime locations were acquired for almost €1.1 billion.

In contrast, the ratio between domestic and international investors on the buyer side is much more balanced. Along with German portfolio managers who parted ways with retail properties in a range of around €6.5 billion (51%), investors from the British Isles and the United States were also particularly active with sales of around €2.2 billion each (17%).

After the first three quarters of 2016 which had been largely determined by single transactions, with shares of between 71% and 79%, the proportion of portfolios increased significantly to 57% in the fourth quarter. With the acquisitions of a Cash&Carry store portfolio by Aroundtown and of the IRIS portfolios (formerly Christie) by Mubadala and Madison Real Estate – a transaction accompanied by CBRE –, the fourth quarter saw two large-scale portfolio sales alone contributing an amount substantially in excess of €1 billion to the overall volume. In terms of the year as a whole, German retail properties worth €8 billion were acquired as single deals, which corresponds to a share of 62%.

The strongest buyer group consisted of open-ended real estate and special funds which invested almost €5 billion or 39% of the entire volume, posting another slight growth (4%) compared with the previous year. Asset and fund managers took second place with €2.8 billion and 22%, followed by private investors who purchased retail properties worth €1.5 billion, equivalent to 12%. On the seller side, as in the year 2015, asset and fund managers as well as developers disposed of retail properties worth €4.3 billion (33%) and €2.9 billion (23%) respectively.

Marked decline in prime yields across all asset classes

Prime yields in the retail segment continued to come under considerable pressure and declined considerably across the board. Pressure from demand caused net initial yields for high-quality shopping centres in the top investment centres to fall. A yield of 4.00% is currently commanded in this segment, representing a downturn of ten basis points compared with the previous quarter. Comparable products in prosperous regional centres came in at 4.60% and were similarly 20 basis points lower in a quarter-on-quarter comparison. Substantial yield declines on the back of strong demand, accompanied by dwindling supply, are also evident in the retail warehouse and retail park segments. For first rate core investments in retail parks and stand-alone retail warehouses, prime yields currently stand at 5.00% (down 25 basis points) and 5.75% (down 50 basis points) respectively. Net initial yields for high-street units come in at between 3.10% (Munich) and 3.60% (Cologne).

“The very good annual result on the German retail property market has delivered renewed proof of how attractive Germany is as a target market in global demand. Along with its still robust economic data, record employment figures, and rising disposable income, Germany is benefiting from its size, with one of Europe’s most profitable retail markets, combined with a polycentric structure which also offers attractive location and investment alternatives in many prosperous regional centres and secondary locations,” explains Jan Dirk Poppinga, Co-Head of Retail Investment at CBRE. “However, we also note that the sustained run on German retail property exacerbated limited product availability in 2016 and put a damper on greater investment momentum,” Poppinga states. “We can nevertheless expect to see similarly high results in 2017, which will affirm the fundamentally long-standing trend of the previous years.” 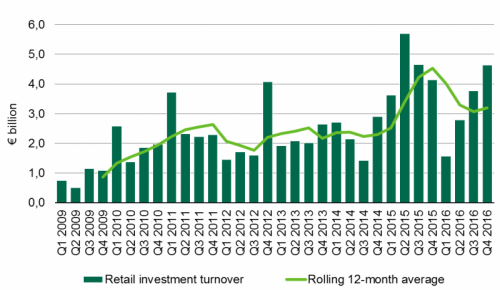 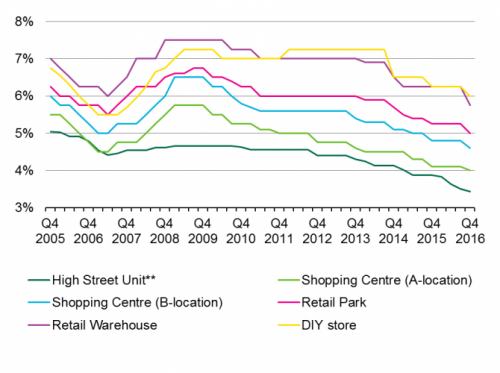 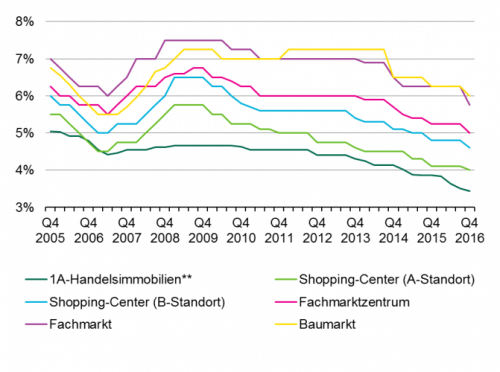