A spectacular fourth quarter in 2016, which alone saw €19.8 billion allocated to German commercial property, ensured a transaction volume totalling €52.5 billion in the year now ended, bringing the investment turnover over the €50 billion mark for the fourth time since 2006. Only 2015 and the boom year of 2007 delivered an even higher result. This is the conclusion drawn in a current analysis prepared by commercial real estate services company CBRE.

“Germany, which has become even more popular with institutional investors due to heightened global political uncertainties, is considered one of the world’s most in-demand investment markets by property investors,” says Fabian Klein, Head of Investment at CBRE Germany. “Excess demand still prevails, especially for prime property in very good locations, and the supply of available investment products is far from able to satisfy growing demand, above all by international property investors. Accordingly, the transaction volume in 2016 dropped 5% below the previous year which was dominated by property deals in the billion range due to corporate takeovers.”

“Germany’s commercial property market is boosted by the country’s thoroughly robust economy, very good labour market data, strong growth in employment in the companies and rising disposable income. Accordingly, we are seeing take-up volumes and rents on the rise, accompanied by an increasingly scant amount of available space. Interest rates, long as well as short term, are stagnating at a low level in relative terms. These are fundamental data which indicate the greater desirability of property as an investment and which investors are increasingly factoring into their strategic investment decisions,” says Jan Linsin, Head of Research at CBRE Germany. 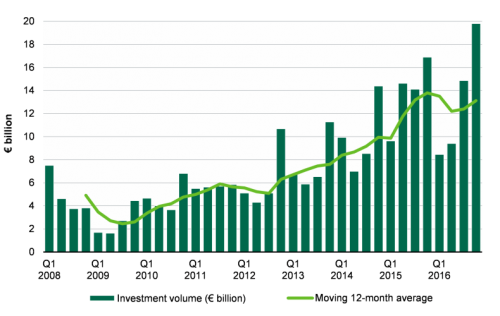 Top 5 locations see a slight downturn in transaction volume – Munich and Frankfurt, each with more than six billion euros, take place one and two

With some €25 billion, around 48% of the transaction volume was accounted for by the Top 5 locations, a moderate decline of only 5% in a year-on-year comparison. This strong result was bolstered by several large-scale deals involving landmark properties, particularly in Munich (up 11% to €6.56 billion) – including Highlight Towers, BayWa Tower and NOVE – and in Frankfurt (up 13% to €6.33 billion) – including Taunusturm, Commerzbank Tower and The Squaire, all properties bought by foreign investors. Along with these two markets, Hamburg also reported a higher investment volume than in 2015 (up 19% to €4.82 billion), while in Berlin and Düsseldorf less was invested in commercial real estate than in the previous year. All in all, however, the lack of investment product still prevents an even higher transaction volume in the top locations even though the holding period tends to be shorter and properties are quicker to come on the market again.

At a good 47%, the major share in the investment volume was attributable to office properties, supported among other things by several large-scale transactions (single deals and portfolios) of €100 million and more each, with the takeover of the Office First portfolio by US investor Blackstone deserving a special mention. The second highest transaction volume was attributable to retail assets (24%) and hotels (9.7%). Warehouse and logistics properties accounted for 8.5%. Care homes proved to be particularly strong and were traded to a value of some €3 billion. This reflects a sustained trend by investors of increasingly channelling funds into alternative investment classes as well such as care homes and hotels in order to satisfy their return requirements. “Especially in the care home segment, we registered several large-scale package deals, including the purchase of a care home portfolio worth almost one billion euros by Primonial REIM from France and the Pegasus care home portfolio by Deutsche Wohnen AG,” says Klein.

Especially in the final quarter of the year, international investors invested again more intensively, accounting for 57% of the investment volume. Over the year as a whole, 45% of the investment volume was transacted by foreign investors compared with the previous year when this figure was still 50%. Generally speaking, international investors in particular are on the lookout for large-scale investment opportunities in Germany. Of the 93 registered large-scale deals, each of over €100 million, just under half were down to investors from abroad and, measured by the volume in this segment, this was even 60%.

“Seven of the ten largest transactions in 2016 were carried out by international investors, including the transfer of the Office First properties to Blackstone, which to date is the largest registered transaction ever in commercial real estate in Germany. The top ten include investors from France, Israel, South Korea and the United Arab Emirates,” Klein stated.

Strong demand for German commercial property put further pressure on prime yields across all asset classes in the final quarter of 2016. Net initial yields for office property dropped again in the wake of strong and steady demand in all top locations: A prime yield averaging 3.60% is currently commanded in the Top 5 office markets. The prime yield for first-rate high street retail property also continued to drop and now averages 3.40% for the Top 5. In addition, new lows of 4.00% and 5.00% respectively were reported for the shopping centre segment and retail parks at year-end 2016. With a prime yield of 4.90%, top-quality logistics properties had fallen below the 5% mark for the first time. Prime yield in the hotel sector stood at 4.75%.

Outlook for 2017: Investment momentum remains at a high level – transaction volume of between €45 and €50 billion possible

“In 2017, we expect very dynamic investment activity which will only be constrained by the availability of attractive property. Alongside the traditional office and retail investment classes, we anticipate growing interest in alternative real estate investments, such as logistics and hotels, as well as social and health care properties. Trading in management intensive properties is also likely to accelerate. The shortfall in investable standing assets also leads us to believe that some investors will have a greater risk appetite for investment in property developments,” Linsin comments. “In view of the steep increase in the inflow of foreign capital, we expect yields to continue their moderate decline over the course of 2017, particularly as domestic investors are set to expand their commitment in the German market given the global political challenges,” Klein added. 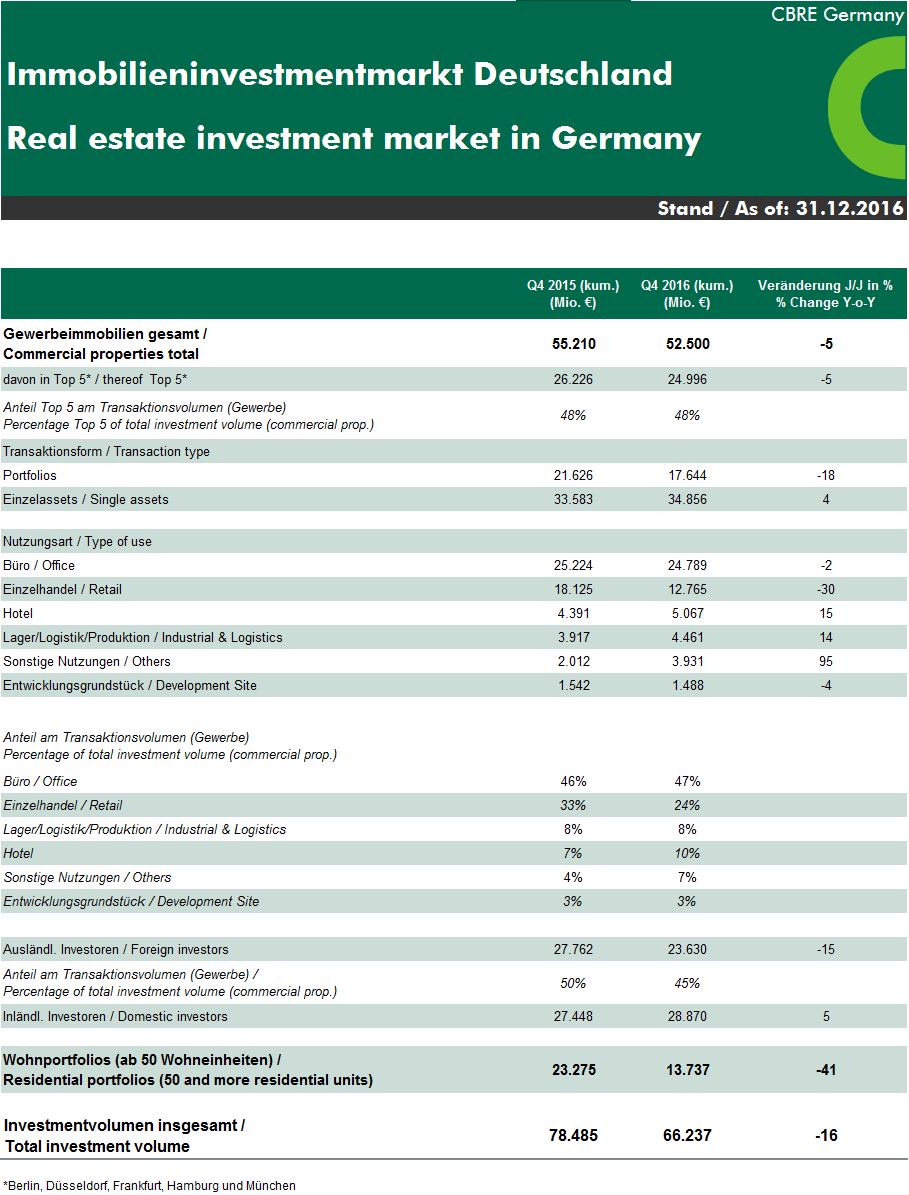