The uptrend on the German investment market for warehouse and transport property that had emerged in the course of 2014 continued through the end of the year as sales climbed to a record total of 3.3 billion euros. According to an analysis conducted by the real estate services firm CBRE, Q4 particularly contributed to the top result. Nearly one billion euros were invested in logistics properties during the three concluding months of 2014. Coming in the wake of three strong quarters, it meant another hike by nearly 74 percent quarter-on-quarter, and marked one of the two best quarter-end result of the past four years, second only to the 1.3 billion euro total of Q1 2014.

Compared to the other commercial asset classes, the performance highlights the attractiveness of investments in German warehousing and logistics properties. It also puts the logistics asset class in third place (after office and retail) in the investment total transacted in Germany with its relative share of 8.4 percent, a one-year gain by another 1.3 percentage points. “The trend is boosted in particular by the success of e-commerce and the increasing competitive pressure among institutional investors who plan to expand their real estate ratio considerably by raising the allocation for German logistics assets,” said Kai F. Oulds, Head of Logistics Investment at CBRE Deutschland. “Add to this that Germany is a strongly export-driven country, and that the logistics sector promises more attractive rates of return than office or retail real estate.”

Foreign Investors Dominating the Market
Foreign real estate investors accounted for more than half (c. 54 percent) of the transaction total in the logistics sector during Q4. For the year as a whole, the market share of international investors was even higher at 59 percent, reflecting commitments of nearly two billion euros. Year-on-year, this equals a growth rate of more than ten percentage points. At the same time, it means that the pro-rata share of foreign investors in the logistics sector actually exceeds their 47 percent share in the German property investment market as a whole.

Nine of the ten largest deals in 2014 were transacted by foreign investors, including the acquisition of Daimler's “Interpark 37” logistics centre of 135,000 square metres in Offenbach an der Queich (Rhineland-Palatinate) by Arabian investors, a transaction facilitated by CBRE. More than other overseas investors, Anglo-Saxon players from the United Kingdom, the United States and Australia dominated the German logistics investment market in 2014 with a combined investment total of more than 1.5 billion euros. “The popularity of the German logistics market among cross-border investors is explained, for one thing, by the country's central location in Europe and by the highly export-driven nature of its economy,” elaborated Oulds. “Another factor is Germany's position as a leading place of manufacture, home to a high number of global market leaders, robust economic perspectives, and an infrastructure of world-class excellence.”

Logistics Sector Investments Driven by e-Commerce
The different types of logistics properties have been subject to a differentiated dynamics over the past year. The bulk of the transaction volume of the year's closing quarter involved distribution warehouses, matching the trend of the previous nine months. During the year as a whole, distribution warehouses attracted the largest share of investments with a total of 2.4 billion euros or a pro-rata share of 71 percent. “Investors continued to show serious interest in the sub-category of distribution property, the so-called XXL logistics properties,” said Oulds. Warehouses of this type, extending over a floor area of 50,000 square metres or more, attracted an investment volume of nearly 857 million euros. On top of that, the investment share of light manufacturing (light industrial) properties experienced a quarter-on-quarter growth by 5.7 percentage points to 13.2 percent of the entire transaction volume of 2014. “There are indications for a somewhat heightened risk tolerance among investors, even though their investment focus in terms of site selection remains on investment-grade properties in good to excellent locations,” added Oulds.

Transaction Volumes by Investor Type
The spectrum of investor types going for logistics properties has remained as diverse in Q4 2014 as ever. Each of the groups active in this market segment committed amounts in the three-digit millions or more. The strongest buyer group in this sense included asset managers and fund managers, led by Blackstone's portfolio acquisitions, which accounted for more than half of this group's investments. Year on year, the amount invested by asset managers and fund managers tripled. Another major group of buyers includes institutional investors such as insurance companies and open-ended property funds specialising in logistics properties, their growing prominence being reflected in a combined transaction volume of more than 745 million euros. Compared to 2013, this equals an increase by 27 percent. Particularly noteworthy are the providers of closed-end funds, who invested more than 250 million euros in logistics assets in 2014, ten times the volume of 2013.

Growing Risk Tolerance on the Investor Side
“The shortage of investment-grade properties is exacerbated by the recent tendency among project developers to place the assets they develop in their own fund vehicles rather than putting them on the market,” said Oulds. “Since the logistics industry offers a great outlook, given the signs for an economic recovery, and since logistics properties show a relatively high yield level compared to office and retail real estate, for instance, property investors are encouraged by a generally growing risk tolerance to step up their investments in more management-intensive value-add products. They are even prepared to accept shorter lease terms on the tenant side again.”

Rising Share of Portfolio Deals
The share of portfolio deals rose to 50 percent in the course of 2014. This is up from a mere 32 percent in 2013. The large logistics packages were almost exclusively bought by foreign investors who accounted for the overwhelming bulk of the portfolio transaction total (85 percent) and thus demonstrated the popularity of warehousing and logistics properties as a high-yield asset class for foreign players. One of the biggest package deals of the year with its nine-digit price tag was the acquisition of a portfolio consisting of several central warehouses of food retailer Tengelmann. The buyer was Blackstone and the transaction was facilitated by CBRE.

Keen Demand Puts Pressure on Yields
Given the mismatch of enormous demand and short supply, especially in the Core segment, the net prime yield declined by 0.25 percentage points to six percent, and this is a trend also reported from the secondary market segment. “However, compared to other countries, but also in comparison to traditional real estate asset classes in Germany, the yield rate remains highly attractive, and will ensure a continued influx of investor capital into Germany's logistics property market,” explained Oulds. Net prime yields for logistics assets marked by modern fit-out quality, located in established sites, and let on long-term leases continue to exceed the yield rates for prime assets in the office and retail property segments in Munich or Frankfurt, for example, by around 150 to 190 basis points. Still, the great demand for logistics assets makes it not improbable that the yield rate will generally keep softening even outside the Core segment.

Outlook
“There is every reason to expect the lively investment dynamic on the German logistics investment market to persist in the year ahead, fuelled by the favourable macroeconomic trends and the rising significance of the online market. With this in mind, we expect transaction volumes to keep developing briskly in 2015 and to maintain the excellent level of 2014, not least because we have noted an increased risk tolerance among investors as it manifests itself in a greater willingness to compromise especially in regard to the length of lease terms,” said Jan Linsin, Head of Research at CBRE Germany.

“The increasing importance of online retailing, the resulting depletion of greenfield plots, the restructuring of the supply chain, and the constraint recently imposed by the German Government to limit the use of undeveloped land to 30 hectares per day until 2020, make it rather obvious that the quest for suitable logistics sites will intensify,” as Oulds elaborated. It is therefore safe to anticipate a rapid increase in the significance of brownfield and conversion areas throughout the year ahead. Indeed, CBRE noticed an accelerating activity among project developers and increasing investments in industrial brownfield areas as early as 2014. 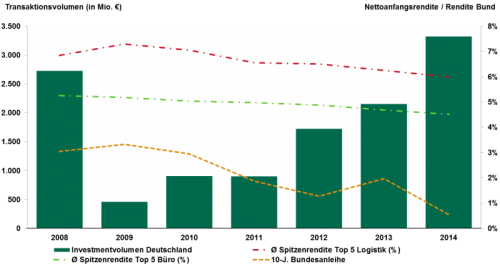